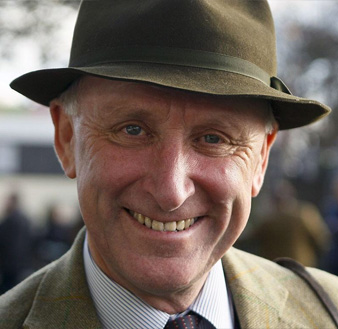 The name of Oliver Sherwood is synonymous with top class National Hunt racing in the British Isles, conjuring up many memories of great races at some of the finest tracks.

Oliver's love of horses stemmed from his parents, Nat & Heather, both keen riders they enjoyed plenty of success in Point to Points in the 50/60s, subsequently he and younger brother Simon became jockeys.

Oliver commenced his racing career in 1974 as a Pupil Assistant to Gavin Pritchard Gordon in Newmarket. In 1975 he moved to Ireland to take up the post of Assistant Trainer to Arthur Moore, where he remained for three years. A vacancy to work for Champion Trainer Fred Winter arose and he managed to combine a successful career as an Amateur Jockey with his role of Assistant Trainer.

Oliver was Champion Amateur Jockey during the 1979/80 season and rode 96 winners in total including three at the Cheltenham Festival.

It seemed natural for Oliver to stay in Lambourn where he bought Rhonehurst and he took out his trainer's licence in 1984.

A true competitor is never satisfied with achievements and Oliver is no different. Ever hungry to gain success for his owners Oliver will not rest on his already impressive laurels which include:

Enabling every horse to achieve its true potential, Oliver Sherwood continues to dig deep to ensure the current residents of Rhonehurst prove to be the crème de la crème of participants in their respective fields who can deservingly follow in the footsteps of greats such as The West Awake, Large Action, Cruising Altitude, Arctic Call, Young Snugfit, Aldino, Atrabates, Young Pokey, Rebel Song, Lord Of The River, Coulton, Be Rude Not To, Him Of Praise, Cenkos and Silver Wedge. Recently Oliver has under his care the likes of Puffin Billy, Deputy Dan, Mischievous Milly and Many Clouds who won him a second Hennessy in 2014, twenty four years after he won it with Arctic Call.

Oliver is a good judge of youngstock and bought all the following Grade One winners- The Breener, Cruising Altitude, Tildarg, Large Action, Be Rude Not To, Him Of Praise, Lord Of The River, Hulysse Royal, Monkerhostin, Claymore, Eric's Charm, Manorson, Jaunty Flight, Puffin Billy, Deputy Dan and Mischievous Milly.

When not training racehorses Oliver is a keen cricketer and was captain of the Lambourn X1, before the intervention of Sunday racing, their greatest rivals being Newmarket captained by William Haggas. Keen on all sport Oliver is also a lifelong Chelsea supporter and tries to get to Stamford Bridge when time allows.